Accomplished Canadian composer Elizabeth Raum was commissioned by the Regina Symphony Orchestra to write a concerto for her daughter, Erika, a brilliant young violinist. Like Mother, Like Daughter explores the working relationship between the composer and the performer, one made doubly special by the familial aspect. Raum’s elder daughter, Jessica, wrote and directed the documentary.

Excerpts from the premiere performance of the completed concerto, Faces of Woman, showcase the talents of these two women. 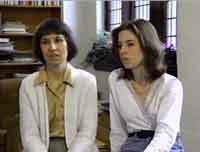 Evolution: A Theme with Variations

Evolution: A Theme with Variations

Composer Elizabeth Raum was commissioned by the Connie Wernikowski of the Saskatchewan Youth Ballet, to write music for a dance she would perform with her daughter. The dance was about the daughter growing into adulthood and the mother’s reluctance to lose her. Elizabeth mirrors the familial aspect by writing the piece for trombone, violin and taped music, and the premiere performance was played by her husband, trombonist Richard Raum and her daughter, violinist Erika Raum.

Feature length movie about the desire of a Prairie girl to become an actress.
Written and directed by Jeff Beesley